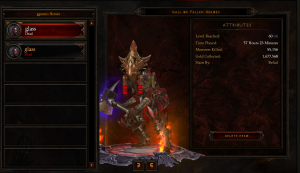 So I recently finished Diablo 3 in hardcore. For the uninitiated, Diablo III is a hack and slash game where you adventure through dungeons and fight the lords of hell and ultimately Diablo. As you play through the game your character becomes more powerful by leveling up and picking up loot dropped by enemies. The game is simple but complex and you can learn all about it as well as how to play through the game on the Diablo 3 Wiki from IGN or other guides on the net.

At any rate, Diablo 3 is designed to be played through multiple times, moving through multiple tiers of difficulty. The first is Normal, then Nightmare, Hell, and finally Inferno. Completing the game on Inferno is a reasonably difficult task in normal mode, where you resurrect every time your character is defeated. In fact, many players abandon the game once reaching Inferno because it can become so frustrating to get quickly wiped out or “one-shotted” by enemies, mobs, and bosses.

Let me tell you about hardcore.

Diablo 3 hardcore mode is unlocked when your character reaches level 10 on normal mode. In this mode, when your character dies, you lose that character as well as all of the items on that character. Because there are multiple tiers of difficulty and you need to accumulate and squirrel away rare items, you could be potentially losing a character and items that took 40-50 hours to accumulate in an instant. When this happens, it’s heart-wrenching and when you come close to death, it’s a huge adrenaline rush.

A few weeks after the game was originally released, a close friend of mine and I organized a LAN party for making a run at hardcore. We played our characters up to level 10 as quickly as possible and then started a marathon run through the game in instant-death mode. Because we were going LAN party-style with everyone in a room, we were well-equipped to work together and communicate as we moved through the quests.

About ten hours into hardcore, we reached a difficult point in the game in Act II, where poisonous enemies start rushing out from hidden walls doing devastating damage to characters without the appropriate armor and protection. We started yelling at each other, “Heal!”, “Help!”, “Run!”, as we were swept over by the adrenaline rush of almost inevitable death. We made a narrow escape through a combination of luck, coordination, and hightened awareness from the excitement.

At this point I was hooked. Playing Diablo 3 Hardcore is like high-stakes gambling: at any point you could lose it all, get loot from an enemy that turns your character into a god, or can heroically move on to the next tier of difficulty, Act, or boss.

We regrouped and then moved on to the Act II boss, Belial, and then got to slashing. Belial is one of the first bosses in the game who can easily annihilate an undisciplined character but we didn’t know this. We all surrounded the boss and slowly whittled down his health. Belial then later transformed into his super-boss form and then poison-bombed the entire platform we were all on with his main attack. Every member of our party died instantly and the day was over.

That is hardcore. And on that day, I decided that I would make it through hardcore if it was the last game I played.

I started playing a little here and there and made another run on Hardcore on my own. I built up a player to a comfortable level and played through the game on normal, learning the patterns of the bosses and enemies. I learned to craft the Staff of Herding for grinding items in Whimshire. I even mobbed the super bosses on Inferno to learn to craft the Hellfire ring.

I played through the game, and carefully moved on towards the Act II boss again on Nightmare difficulty after completing the first difficulty tier on my own (woot!). I started slashing on Belial and got him again into his super-boss form. I was ready this time, my character had an escape spell so that if Belial wiped me out, I would instantly heal and could recover from his poison bombs. Belial’s poison bombs started and then *BOOM* one-shot. I died, all my items were gone, and my character was lost. I swore at Blizzard and reluctantly started over. I now knew that I couldn’t depend on escape spells to save me.

Again, I carefully played through the game, making it all the way to the Third tier of difficulty, Hell. At this point, I had dumped countless hours into this character, most likely around 35-40 hours… and I was confident I was going to make it. I started off on Act I and blew through to the boss, “The Butcher”. Having already played through the butcher a dozen times at this point I cockily rushed him with my Monk character, quickly pushing down his health to the breaking point. Then, out of nowhere, *Boom* a fire pattern on the level wiped my character down to low health. I recovered with a potion only to have the butcher pull me across the level with his weapon and then pound me to death.

My heart sank as I stared emptily at my screen. I just lost my character. In a few instants, I quickly fell through the 5 stages of grief.

I’d had enough. I rage quit Diablo 3 as I have never rage quit a game before. It was very late at night and I had been well underway in my mission, more than an hour or two of playtime in the session. I deleted all my characters, wiped my account, and unsubscribed from the D3 forum. I uninstalled Diablo 3 from my computer and swore off the game…

I let the failure sink in and hung up my mouse and keyboard before falling asleep, exhausted and defeated after losing 3 characters to the evils of hardcore Diablo 3.

Roughly 6 months after my rage-quit, when Diablo 3 released on console, I was drawn back in. I restarted the game again on normal and played through it. I realized the console version is easier! I would have another chance at my Hardcore D3 dream. With new-found hope and controller in hand, I got accustomed to the game again and then decided it was time to have a go at Hardcore once more.

I built up a character slowly and rushed through the game to the first challenging sub-boss on Act I, the Leoric, the Skeleton King. He annihilated me. So much for it being as much easier as I’d thought while playing through on Normal…

I started up another character, and again was defeated short of even finishing Act I… I was wrong, D3 on console Hardcore was not as different as I had hoped it would be from playing on the Desktop. Not only that, I felt bad when my characters died: I was running out of names to give my heroes!

This time it’s going to be different… f’reals

I needed a plan. I knew at this point I was not going to be able to make it through hardcore nimbly-bimbly by just building up a character and running through dungeons. I had lost 5 characters to the game and had dumped countless hours into characters and items lost frivolously to bosses I was unprepared for.

I needed a strategy and I knew I would not make it through alive without careful planning and skill. I devised a plan and ended up finishing the game with a team of characters I was emotionally detached from, 0 and 1. Through patience, focus, and perseverance I ultimately finished and could finally hang up the controller but it took a year and a pile of lost characters in the Hall of the Fallen.

I just wrapped up Diablo 3 Hardcore Strategy. Time for a victory dance.

Learn about some final thoughts on my last Diablo 3 post: Diablo 3 on Hardcore – The end (part 3)