I recently started at Google and the first thing that happened on start for me was I was issued a brand new MacBook Air. I just barely missed the newly released version based on the Ivy Bridge and including a slightly sharper display… but I’m not losing any sleep over it because I’ll be using the machine solely as a thin client – accessing services and servers remotely. Every time I get a new machine I make a point of pimping it out and this machine is no exception.  The following lists a few things that I did to move in and feel more at home. Before my last MacBook was stolen… I had learned a thing or two about tweaking out a Mac, it’s been a while since I last did this so I figured why not remember all the nuances I love and combine them into a post. 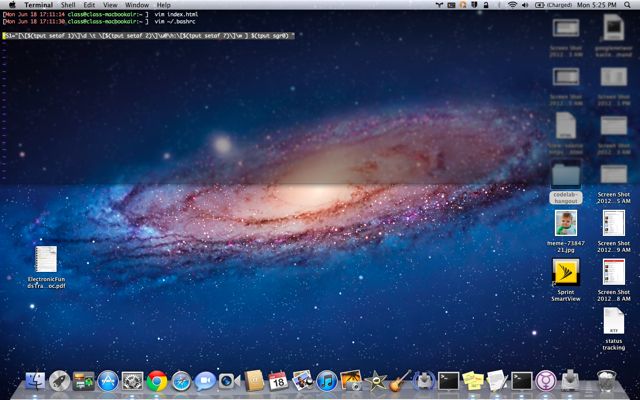 This one is so important to me that I almost want to post it twice.  I used to use a killer app called Visor that adds a Quake style drop down command prompt whenever you press control+`.  Having a command prompt everywhere, shared across multiple spaces (desktops?) is very handy.  The app has since changed to TotalTerminal and is a little harder to get rolling the way that I like.  However, once I figured out a few nits, I was good to go. The nits…

Fix up the bash prompt
I just like to color everything and add the local path to the prompt.  The following is in my .bashrc:
For more information on how to colorize and customize bash, read BASH Shell change the color of my shell
Install Quicksilver 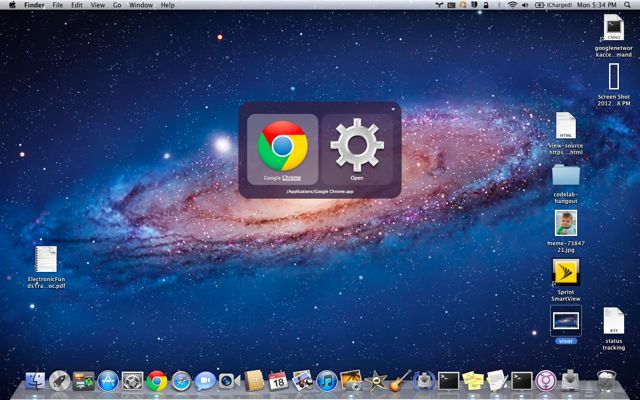 This is my equivalent to Win+R in Windows. QuickSilver is a much better scoped version of Spotlight.  It adds a new shortcut, Control+space, and gives applications preference for results.
Install Divvy 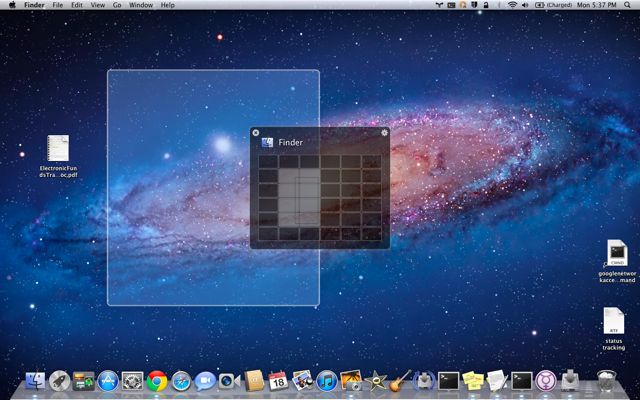 Divvy is an app that replicates the function of Windows Snap, a useful window management feature that Microsoft introduced in Windows 7.  I am totally hooked on setting up Windows side-by-side so this is pretty much a final must have utility for me.
Install and tweak Google Chrome
Google Chrome is hands down my preferred browser for Macs.
The first thing I do is set up multiple users for various reasons like testing, logging in to multiple accounts on the same service, and separating sets of bookmarks and extensions – these sync over the cloud, btw.  To add a user, just open Chrome settings and click add user at the bottom. The following screenshot shows my users near the bottom of the screen. 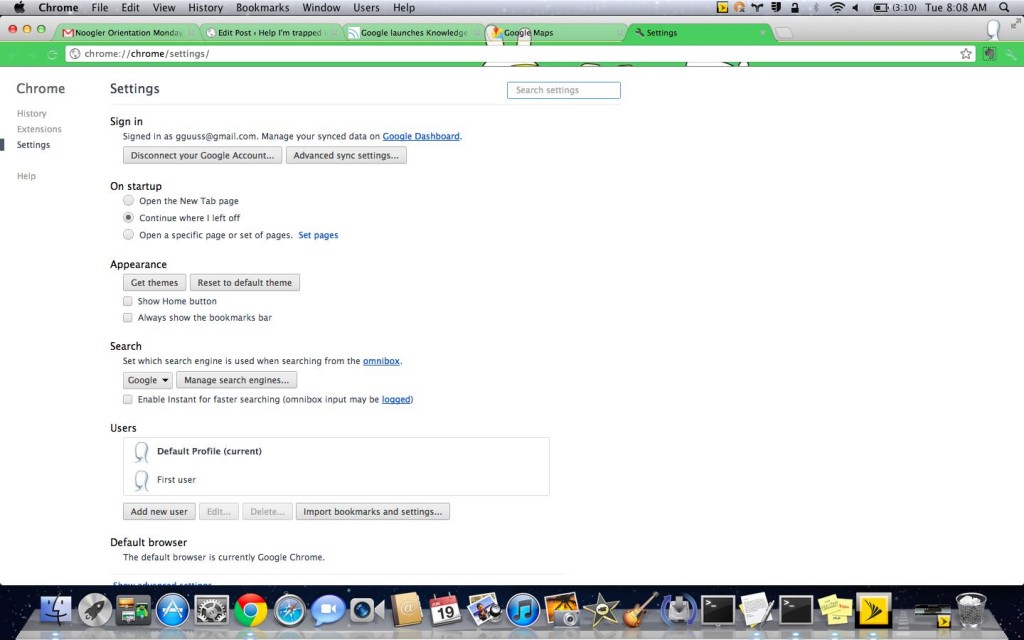 After you have configured users, you can switch user by clicking the face icon on the top right of the browser window.  Next, I set up different themes for each user so it’s blatantly obvious which browser and user I am on / using. Next, I configure extensions for the users, a couple of my current favorites are:
Final Thoughts
Now I feel much more at home on my Mac, I have my command prompt everywhere, it looks the way I want, my window management is much less frustrating, I don’t have to open finder to launch rarely used apps, and my web browser (where I do most of my work) is all cleaned up and themed out. This MacBook has been pimped.